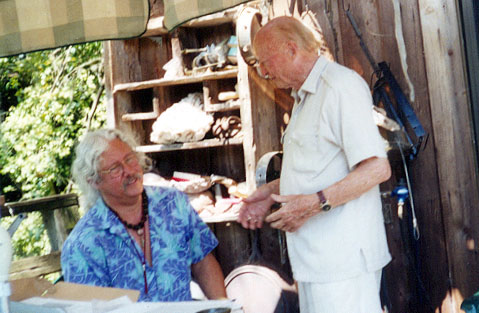 Back in the 1940s and '50s, folk-singing legend Woody Guthrie would often visit Stetson Kennedy's quiet lakefront home in Fruit Cove to hang out between concert tours and radio shows.

But Guthrie's son, Arlo, had never seen where his late father hung his hat in Florida until April 15, when he briefly made the 85-year-old Kennedy's land his land following a concert at the Florida Theatre.

"I fixed a buffet breakfast and everyone ate and talked. His wife videotaped as we swapped tales about Woody on tape," Kennedy said. "I knew quite a few things about Woody that he didn't know, and he knew things I didn't know. We were both pretty much carried away."

Oklahoma's dust storms of 1935 drove Woody Guthrie's family to California, where he began writing songs like This Land Is Your Land. Meanwhile, Kennedy was a social activist who wrote about the Ku Klux Klan, then did a book on Florida folklore in 1942.

Guthrie wrote a letter saying he liked it.

"He said 'Don't be surprised if someday, I come amblin' down the driveway with my guitar,'" Kennedy remembered. "From time to time he would stay for weeks."

Kennedy and Arlo shared tales about the time Woody, who died in 1967, burned himself on a barbecue in 1952 and hitched a ride to a Jacksonville hospital, and one about a rifle Kennedy kept handy in case the Klan visited.

"Woody had cartridges made and proceeded to get a unique system of firing it, laying it like a cannon over a log and popping off 1-gallon wine bottles at 100 yards," Kennedy said. "I told Arlo I would will him the rifle that Woody trained with to fight off terrorists."

Kennedy said he arranged the breakfast visit after the concert.