Jim Crow Guide is an excellent guide to life in the Jim Crow South. Stetson Kennedy’s book amply captures this era, when terrorism of an entire class of U.S. citizens was the order of the day in the South. The author’s style of writing and unique presentation technique make this work easy reading for general readers and all students of American History from ninth grade and above. Marcia Ward, Librarian, Broward Community College

Stetson offered this book for free for all to read

Here's to my grandson Sean - who in the course of 8 months put this book on the web, for all to see, for all time. Thanks! Stetson Kennedy 2007 (Signed inscription given to his grandson Sean Kennedy)

READ FOR FREE:
Jim Crow Guide to the U.S.A.: The Way it was - The Laws, Customs and Etiquette Governing the Conduct of Nonwhites and Other Minorities as Second-Class Citizen 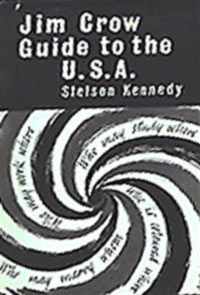 Racial discrimination is an old evil, but it has grown into one of the principal problems in the western world today.

This book is a guide to racial relations in the USA. It show how racial discrimination not only comes into such matter as education, jobs and marriage but also affects the whole of everyday behaviors, the terms in which people may address one another, the way they may walk on the pavement or ride in a streetcar, the raising of hats, the shaking of hands.

This is a courageous book, horrifying in its implication, humane in its message. It will help to hasten the day when racial discrimination in the USA becomes a thing of the past. Original summary from book cover 1959

Jim Crow Guide documents the system of legally imposed American apartheid that prevailed during what Stetson Kennedy calls "the long century from Emancipation to the Overcoming." The mock guidebook covers every area of activity where the tentacles of Jim Crow reached. From the texts of state statutes, municipal ordinances, federal regulations, and judicial rulings, Kennedy exhumes the legalistic skeleton of Jim Crow in a work of permanent value for scholars and of exceptional appeal for general readers.