In the writings of Stetson Kennedy, education and social action are constantly joined. Generations of human rights advocates have used Stetson's investigative reporting and research to improve the conditions of agricultural workers, women, Latinos, and many others. Stetson Kennedy's pursuit of honesty, social equality, and freedom was unparalleled. He told the stories of America's forgotten people. TDr. Paul Ortiz, DirectorL, Samuel Proctor Oral History Program, University of Florida

I hadn't heard of Mr. Kennedy but when I read about him and the work he had done to make sure that this country did not forget what it had done to Africans and African Americans I felt honored to be able to find this work on Amazon. The work that the WPA did helped to immortalize Africans and African Americans , their success and struggles. Charisma Dixon on June 8, 2015 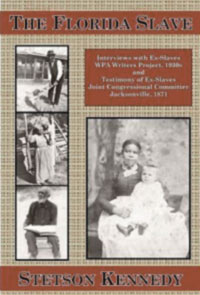 This book, The Florida Slave, published by the Florida Historical Society Press, is the last project completed by author, activist, and folklorist Stetson Kennedy before his death on August 27, 2011. Although he did not live to see the book in print, he had finished his work on the manuscript and was very happy with the cover design. The book contains interviews with ex-slaves collected by the Works Progress Administration (WPA) FLoriuda Writers Project (FWP) in the 1930's as well as the testimony of es-slaves before the Joint Congressional Committees in Jacksonville from 1871. Stetson compiled and edited the text, and wrote a fascinating introduction and in insightful After-word. Like the best of stetsons work, The FLorida Slave not only preservers an important part of FLorida History and culture, it is an impassioned call for human rights ant the ethical treatment of all people.

Author and activist Stetson Kennedy was born in Jacksonville, Florida on October 5, 1916, and he died there on August 27, 2011. This book, The Florida Slave, was the last project he completed. Stetson Kennedy was a human rights activist and author of many books on Florida history and culture. He was head of the Florida Writers Project unit on folklore, oral history, and socio-ethnic studies between 1937 and 1942, resulting in the classic book Palmetto Country. Following World War II, Kennedy infiltrated the Ku Klux Klan, and experience he detailed in the book The Klan Unmasked. In this newly compiled and edited work, Stetson Kennedy offers a fresh perspective on this collection of Florida slave narratives and their relevance to contemporary society.