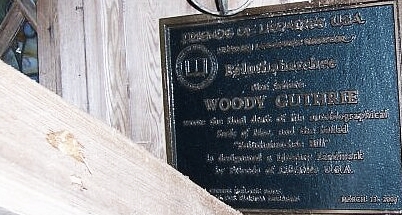 Beluthahatchee, the homesite of Stetson was designated as a literary landmark by Friends of Libraries USA, sponsored by Jean Trebbi, Director of the Florida Center for the Book. Which made the nomination. The Initial designation commemorated famed folk balladeer Woody Guthrie, who made Beluthahatchee his Florida hangout. He wrote a final draft of his autobiographical ''Seeds Of Man'' there, as well as the ballad (about Kennedy) ''Beluthahatchee Bill.''

Founder of Literary Landmarks and publisher Frederic G. Ruffner, Jr. of Fort Lauderdale presented a plaque which has been mounted on his home at Beluthahatchee. It joins the family of 60 other literary sites designated nationwide for writers including Hemingway, Faulkner, Poe, Jack London, W.E.B. DuBois, Richard Wright and Lillian Hellman to name a few. Following the presentation which featured the Jacksonville Mayor, Kennedy presented Arlo a WW I rifle used by Woody during his stays at Beluthahatchee to help repel raids by KKK terrorists. Arlo has said he plans to place the it in the Woody Guthrie Museum he recently established in Alice's Restaurant.

For the Beluthahatchee site (meaning place of forgiveness in a Native american language), the Florida Center for the Book will propose another plaque upon Kennedy's demise.