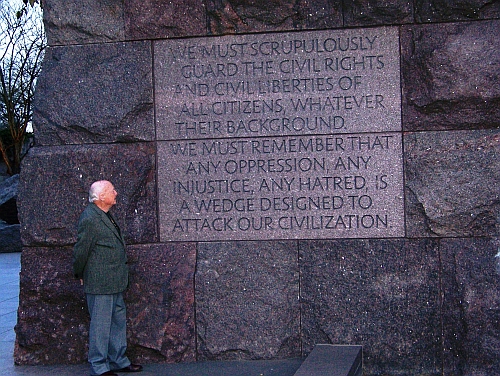 It was in the spring of 1936 that 19-year old Stetson Kennedy stood on Duval Street in Key West watching President Franklin Delano Roosevelt ride by in an open touring car.

And, it was in the spring of 2008, more than seven decades later, that 91-year old Stetson Kennedy stood at the foot of the Roosevelt Memorial in Washington, D.C. reflecting on the powerful legacy Roosevelt left behind.

Written in stone at the Memorial are Roosevelt's immortal words:

"We must scrupulously guard the civil rights and civil liberties of all citizens, whatever their background. We must remember that any oppression, any injustice, any hatred, is a wedge designed to attack our civilization."

They are words that Kennedy took to heart, he says, as a young man when he worked in the 1930's as an editor for the WPA (Works Progress Administration) Florida Writer's Project. The WPA was one of Roosevelt's New Deal initiatives designed to help get America back on its economic feet following the Great Depression.

On March 13, in celebration of the 75th anniversary of the New Deal, Kennedy and several other New Deal workers were honored at by the National New Deal Preservation Association at the Library of Congress in Washington, D.C.

"All of us working on the WPA (except administrators) had to sign a Pauper's Oath - that we had no job, money, no property and no prospect of getting any of those things," said Kennedy, adding that he was "eminently qualified" for the job in all respects.

Also qualified, he recalled, was the late author and anthropologist Zora Neale Hurston, with whom he worked for five years. "Zora wangled the Library of Congress recording machine for our Florida Writer's Project," said Kennedy. "It was the size of a coffee table and took two strong men to carry it."

The extensive collection of oral history recordings, folk songs, photographs and ethnic tales gathered by Kennedy, Hurston and the other budding young authors and activists working for the WPA Florida Writer's Project is now housed in the Library of Congress. Both Kennedy and Hurston were destined to spend the rest of their lives working and writing to preserve the social equality and civil rights of all citizens.

As a result of intimate exploration of his home state during those years with the WPA, Kennedy's first book, "Palmetto Country," published in 1942, included dramatic revelations of unfair labor practices, racism and poverty as well as a colorful look at Florida's flora, fauna and folk-life.

When WPA folklore director Alan Lomax shared Kennedy's book with Woody Guthrie, the legendary folk singer tore off the cover and mailed it to the author with the following note written on it: "If every book on the shelf hit and kicked and jumped in the right direction just two-thirds as much as your "Palmetto Country" does, I'd feel lots more like a man I'm gonna go down some day and try a piece of that sweet Palmetto Country." The note was signed "Your study buddy, Woody."

A few years later, Guthrie made good on his promise. He would eventually write his autobiography, "Seeds of Man," while at Kennedy's home place, Beluthahatchee, on State Road 13 in St. Johns County (now dubbed a literary landmark and slated to be a Florida Heritage Park). Guthrie also wrote the campaign songs when his "stud buddy" Stetson Kennedy made a courageous, though unsuccessful run for congress in 1950 on a platform of Total Equality.

On hand to commend Kennedy and other honorees for their lifelong devotion in carrying forward the New Deal principles were FDR's granddaughter, Eleanor (Ellie) Roosevelt Seagraves and her daughter, Anna Roosevelt Fierst.

"I was there for the big bust of 1929, and here I am three quarters of a century later faced with the prospect of any number of big busts just around the corner," Kennedy told a large gathering of dignitaries. "If Americans of all persuasions do not unite to nip these impending crises in the bud, our beloved Uncle Sam may well end up on skid row."

Still vigorously stumping for human rights and equality, Kennedy and his wife, historian, educator and local bookstore owner, Sandra Parks, are busy St. Augustine residents. In addition to working on his memoir, "Dissident at Large," and communicating weekly with a Hollywood film producer on a documentary about his 1940's infiltration of the Ku Klux Klan, Kennedy is participating in April at a Washington, D.C. symposium on the Future of American Democracy and in July at the Zora Neale Hurston Florida Workshop sponsored by the American Humanities Council.

And, in October of 2008, Kennedy will be in Key West to celebrate his 92nd birthday and publication of "Grits & Grunts," his long-awaited book on Key West days gone by days when Hemingway sat on his regular bar stool at Sloppy Joe's and colorful island fishermen had sayings like "Fishy, Fishy, Bite. Your Mama said you could. Your Daddy said you might. Fishy, Fishy, Bite!"

"Those were the days when FDR's New Deal was still new," said Kennedy, as he accepted his certificate and medal at the Library of Congress. "The kind of government action for the people that was exemplified by the New Deal needs to be reborn today.

IN THE HOUSE OF REPRESENTATIVES
May, 2008

Ms. LEE of California submitted the following resolution; which was
referred to the Committee

WHEREAS this year marks the 75th anniversary of the period of time
beginning after President Roosevelt’s inauguration on March 4, 1933
and ending June 16, 1933, known as the “First Hundred Days,” and
recognized as an unprecedented period of legislative action which
engendered the programs constituted in the New Deal;

WHEREAS the New Deal was a set of programs and policies to promote
economic recovery as well as social and financial reform during a
time of severe economic and social distress due to the conditions
of the Great Depression;

WHEREAS the United States of America has inherited a massive public
works and architectural legacy from these programs;

Whereas these infrastructure projects employed millions of
individuals who planted more than 3 billion trees and constructed
or repaired 650,000 miles of public roads, 125,000 public
buildings, 75,000 bridges, 8,000 parks, 800 airports, as well as a
number of sewage-disposal plants;

WHEREAS the income from millions of jobs created by the New Deal
lifted large sectors of people out of poverty and provided
stability to every sector of the U.S. economy;

WHEREAS the federal programs of the New Deal included projects for
art, forest and soil conservation, distribution of food and
clothing, education, historical surveys, library and book repair,
medical, dental and nursing programs, music, recreation, writing,
theater, disaster assistance, and many other activities;

WHEREAS the many cultural programs of the New Deal cataloged and
supported the development of distinctive American Art and oral
histories, and further established the arts as a central and
beneficial element of American society;

WHEREAS the New Deal created important institutions such as Social
Security, the Federal Deposit Insurance Corporation, the Securities
Exchange Commission, and the National Labor Relations Board;

WHEREAS the New Deal illustrates the ability of the federal
government to act as a positive and instrumental force for change
in addressing social and economic crises for the benefit of all
people in the United States;

WHEREAS the current economic crisis, growing income inequality
between rich and poor, and the degradation of infrastructure and
the environment elicit the need for programs similar to the New
Deal both in spirit and in substance; and, therefore, be it

RESOLVED BY THE US HOUSE OF REPRESENTATIVES (the Senate
concurring), That Congress-

1) Commends the accomplishments of the New Deal in this, the
75th anniversary of the legislation establishing the initial New
Deal social and public works programs; and

2) Acknowledges the inventiveness, resourcefulness, and
creativity of the administrators and workers of the many New Deal
programs; and

3) Recognizes the important social and economic contributions
of the New Deal to the nation; and

4) Encourages the people of the United States to observe the
week commencing June 16, 2008, as “National New Deal Week” and to
promote recognition and appreciation for the New Deal legacy during
that time.