Stetson died on the 27th of August at 09:36 EDT. He was with his wife and stepdaughter and was in no apparent pain. A few days before his passing, Stetson was lucid and his mind sharp as ever. The doctor, checking on his mental faculties asked, "where are you from?" Kennedy quickly replied, The planet Earth 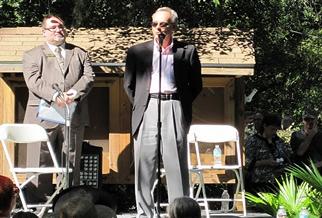 Thanks to all of you for coming today, Stetson would be pleased.

I chose not to be a common man. That is a quote I read some two decades ago and recall it having a profound effect on me. I was not sure why until I realized that my father, Stetson, was such a man. Jean Kennedy, a surviving sister, tells me that Stetson was different as a teenager. Even then she vividly recalls, he was thinking if broader issues, often at the expense of interest in his family. I can add that he was an uncommon Dad. I recall as a boy thinking how serious all of his discussions were. I thought it interesting how he always seemed to be focused on broad issues facing mankind. One of my friends at the time once asked, “Does he ever do things like play catch with you in the yard?” Well, no, I told him. In reflecting on that relationship now I realize he imparted a much more important gift to me, the thought that we can all make a difference. I have different causes than Stetson, but I nonetheless am influencing thinking and people’s lives in other arenas.

*(At this moment, a stunning large brown hawk swoops a couple times low over the audience culminating in a loud crow, causing such a reaction as to interrupt Kennedy from his talk, creating a mix of gasps and laughter from the attentive audience)

Looking at Stetson in terms of aptitudes, among his gifts was a photographic memory about all things concerning folklore, human rights and mother earth. As many of you know, he could instantly leap back 50 to 80 years and describe minute details of an event. As recently as a few years ago when we were in Key West, I witnessed him correcting my uncle Henry Ogden on the pronunciation of a mutual friend from the 1940’s. Henry was born and raised in Key West, Stetson was then a visitor with WPA.

Stetsons wish was that his legacy would be punctuated by those who shared his values about his causes. Let me publicly thank my son Sean for diligently working with Stetson and Sandra to build and maintain the Stetson Kennedy web site. For those of you who wish to support Stetson’s legacy there is an envelope in your program that can be used for financial support. 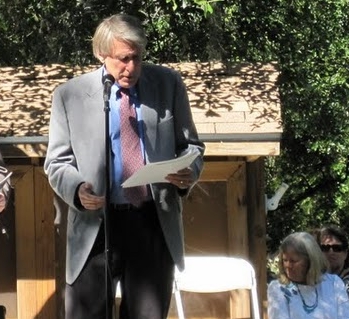 I am honored to be here, but I just wish I’d stopped by for another occasion.

It’s strange being in this familiar place, knowing that Stetson Kennedy won’t come down the driveway pushing a wheel-barrow full of muck; or, pull up in that ratty convertible, bald-head gleaming, waving a tattered beret; or more likely, he’d be in the cottage, holding court at the kitchen table with strange faces from God knows where. For 60-plus years, meeting strangers, who were about to become friends, was the norm at Beluthahatchee. Stetson was an adopter of people, a grand foster parent who left the light on for almost everyone.

I’m glad to see so many of his other “slightly wrinkled” children here today. I’m sure you, as well as his many friends who’ve passed, including: Alan Lomax, Woody Guthrie, Joyce Ann Kennedy, Richard Wright, Jean Paul Sartre, Mitchell Atalla and Studs Terkel all cherished his friendship.

Getting to Knowing the Wizard
Oh, but for anyone spending time with the wizard of Beluthahatchee, on his home turf, it could be a bit like holding a porcupine on your lap, while sitting through a grand, eloquent movie. On occasion you’d get pricked, when disagreements on politics, food or other serious matters arose.

But being with Stets, as he tossed chopped fish to the ever present birds, shook his head at CNN or talked about the old days, and more often the new days, was a pure delight.
When the news was bad, he’d say, “I’ve been telling people for years, when you see a positive trend, call me collect: and nobody’s called.” He acknowledged positive, historic moments, however, he was far from sure about whether the election of African Americans, President Barack Obama and Mayor Alvin Brown, was a trend or a mere respite in the eye of the storm.

Getting the Call
You know, when friends die, I rarely exhibit the appropriate made-for-the-movies reaction. I’ll say Kaddish and I’m sad, but rarely overwhelmed.  Yet, with Stetson, when that call came, the pain was instantaneous and surreal.

I could barely breathe, and after my wife consoled me, as wives will do, with the reality of his age and a life well-lived, I fell into my office chair and spent a few days, reading and re-reading dozens of Stetson Kennedy obits. Several, including Diane Roberts of the Guardian and Paul Ortiz in Facing South, got it right. And Peggy Bulger, bless her heart, fought the good fight in clarifying Stetson’s history in several publications.

However, a couple Florida writers, under the guise of objective journalism, magnified and distorted life facts. With “no fear” of his responding, they feebly—and without subtlety-- tried to settle old scores. In the midst of my stewing over these indiscretions, Sandra Parks Kennedy called and asked me to speak about my friendship with Stetson…and brought me to a more positive space. Thank you Sandra.

A Warts and All Hero

Over 26 years Stetson and I had several hundred conversations and interviews… and I think I knew him well.

Late nights, seated on the porch of this A-frame cedar cottage, perched above the gators and turtles, sipping glasses of fine, Publix wine, or bottles of his favored Stellas and Peroni. He spoke, eyes glancing past the cypress, at the lights across the black waters. A little like Fitzgerald’s Gatsby, but not much, because while Gatsby stared off at a sentimental green light, Stetson had few illusions about his role in this society.

Jacksonville’s A. Philip Randolph said, “Justice is never given. It is exacted and the struggle must be continuous for freedom is never a final fact, but a continuing evolving process.”
Stetson knew that in “his” business, there was no final destination. And unlike Randolph and James Weldon Johnson, after leaving for New York and later Europe, he returned to take a stand in an un-reconstructed Florida.

William Stetson Kennedy was an authentic warts and all hero. In the world of race relations, he stood head and shoulders above all the white male leaders that preceded and followed him along the banks of the St. John’s River…

He was imaginative, and yes, mischievous, but never quixotic, in battling Jim Crow. In 1950, when he took on then segregationist George Smathers, he knew he’d lose that election, however, in running he publicized an alternative view of politics and race.    A walking talking, MRI, a gregarious, bi-pedal X-Ray machine, he looked deep below the PR-laden surface of the New South at the diseases of racism, greed, and environmental exploitation that plagued, and still plague this land he called home.

A folk-intellect of the first order, an environmentalist, an iconoclastic author and
oral historian, but most of all Stetson Kennedy was a man of courage. Without hesitation, he took on the evils of his and our days. And he remains a treasure for Florida and all of America, but especially, on this day, for you and me.

Thanking Stetson
Stetson Kennedy, wherever you are for me it was a great relationship, with the
normal  hills  and valleys and plenty of joy. You gave me folk-wisdom, as you reminded me of my responsibilities as a human being, a writer, a father; and I love you for it. We will greatly miss Stetson Kennedy the Old Swamp Fox, the Wizard of Beluthahatchee, the Human Rights “Colossus” of St. John’s and Duval Counties… Yet, because of his life-long example and the wisdom he shared, we are better equipped to deal with both the sour… and the sweet… days ahead. Thank you Stetson… 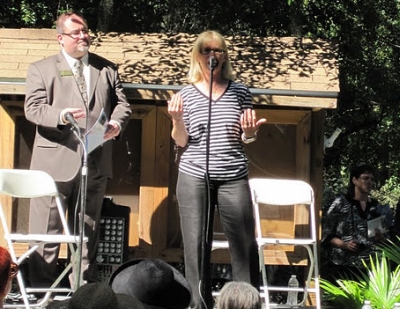 First of all let me thank Sandra Parks Kennedy for finding a place on the program for me when she was not sure I would be able to make it today.
Stetson Kennedy was my stepfather for many years.   I have had almost forty years to prepare for today but no one is ever really prepared.  I will be brief.  Stetson’s life inspired me but it took living in Boston to allow me to have some objectivity on his career.

While there were many times that he stood up for the causes that he championed I remember being honored by him when he called to invite me to be a member of his new Foundation’s Advisory Council.  In his typical, direct way he asked me “if my values were still correct and true” without saying to my causes.  How many of you can raise your hands today to say “Yes” my values are correct and true.  [Thank you all for raising your hands.]  Stetson went on to tell me about the Foundation and the other members of the Advisory Council.  I was doubly honored then to have my name placed with Archbishop Desmond Tutu and Professor Cornell West.

With my miles of objectivity in hand I began to see more of the meaning of Stetson’s place in the fight for Civil Rights.  I had been using a more Southern lens and a lens on my parent.  Sadly it took this perspective and being re-schooled in the work of the abolitionists and 20th century freedom fighters through my work at Boston’s Museum of African American History to see Stetson as a man not bounded by the usual, a man for the nation and the world.

I could now see that he was more like William Lloyd Garrison, the 19th century abolitionist who also used the pen instead of the sword.  Fortunately Stetson was now subjected to the physical tortures that Garrison experienced but he was always under threats from the Klan.  He spoke out for Civil Rights during a difference time when slavery had long been ended by law but while Jim Crow still ruled and hate crimes prevailed.  His books, public speaking, and continued championing of Human Rights helps us all “keep our values correct and true.”

Today, Dr. Peggy Bulger has given us a bright picture of Stetson’s work as a folklorist.  I will add that when it comes to his work in recording the folklore and folklife of the state of Florida he cannot be compared to anyone else.  Stetson stands alone as one of the pioneers in recording a Florida that we no longer have.

Dr. Bulger also wondered if someone would step up for this century to take Stetson’s place.  I hope so but that someone will be different.  I hope she or he will have the fire and passion for Stetson’s causes that he brought and never let flag.